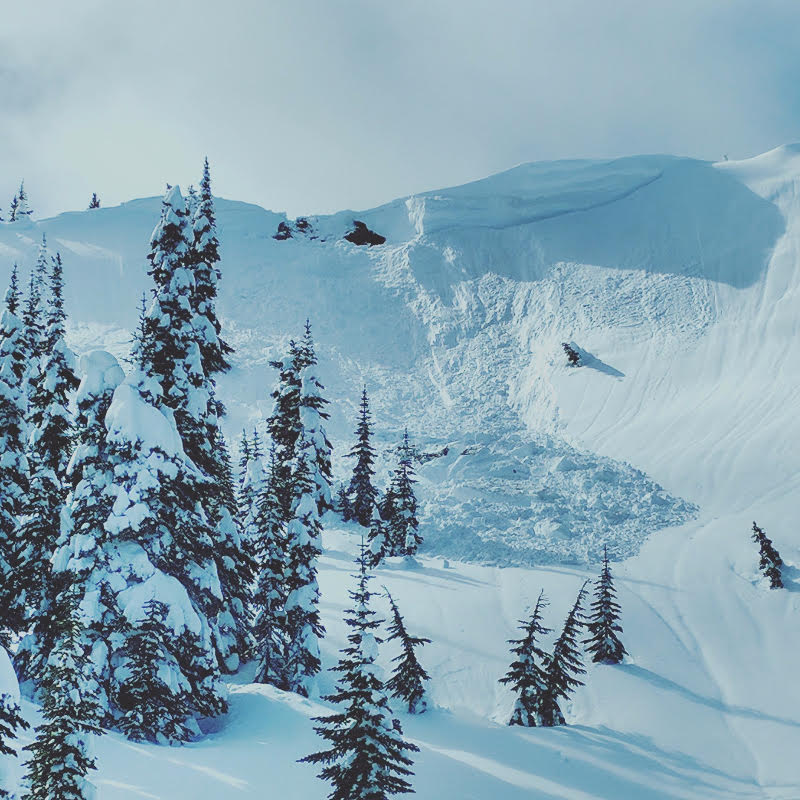 Human-triggered cornice fall avalanche from March 10th, 2017. The crown release exposed bedrock at the ridge-crest and triggered a slab avalanche, building up a debris pile at the bottom of the slope which included car-sized cornice fragments.

On a clear, calm day, ridgelines are favorite resting places for backcountry travelers. Potentially lower angled terrain offers spacious views and a chance to contemplate how to harness gravity on the way down. However, ridge-lines have hazards of their own - cornices!

The National Avalanche Center defines a cornice as "a mass of snow deposited by the wind, often overhanging, and usually near a sharp terrain break such as a ridge." They form most efficiently at moderate windspeeds (15-25 mph). Over the course of a winter season, cornices build up, creating a significant overhang hazard on leeward slopes (typically NW-E). Once formed, cornices generally break off at least once each season.  Late season is a particularly hazardous time since these hulking cantilevers become overloaded and weaken during warmer temperatures . Failure might occur naturally, but just as on avalanche slopes, your weight might tip the fragile structure (and you) over the edge - quite literally!

Like an icefall avalanche, cornice fall can be an objective hazard, sending down chunks of snow capable of triggering any sensitive layers on an avalanche slope below. A leeward slope sightline often lures us into the fracture zone of a cornice. Pick a safe vantage, ideally an exposed rock, as cornices tend to break farther back than many back-country travelers expect! In fact, you might not even have to approach the edge of a cornice to stand in harm's way. A schematic diagram produced by the National Avalanche Center illustrates this point.

A recent accident on 10 March 2017 near Hurricane Ridge in the Olympic Mountains highlights the user awareness issue. On this particular day, the Northwest Avalanche Center issued HIGH avalanche danger at all elevations for the Olympic Mountains and advises: "Due to the potential for large avalanches in many areas following Thursday's complex storm, travel in avalanche terrain is not recommended on Friday. Allow the recently stressed snowpack time to settle and stay out of consequential terrain."

On this day, two snowboarders were heading along a southeast-trending ridgeline, adjacent to the Hurricane Ridge Road (see the map, below). Reports on the ground indicated a frozen crust about 2 inches deep saturated with the previous night's rainfall standing atop 2+ feet of new snowfall from the prior week. 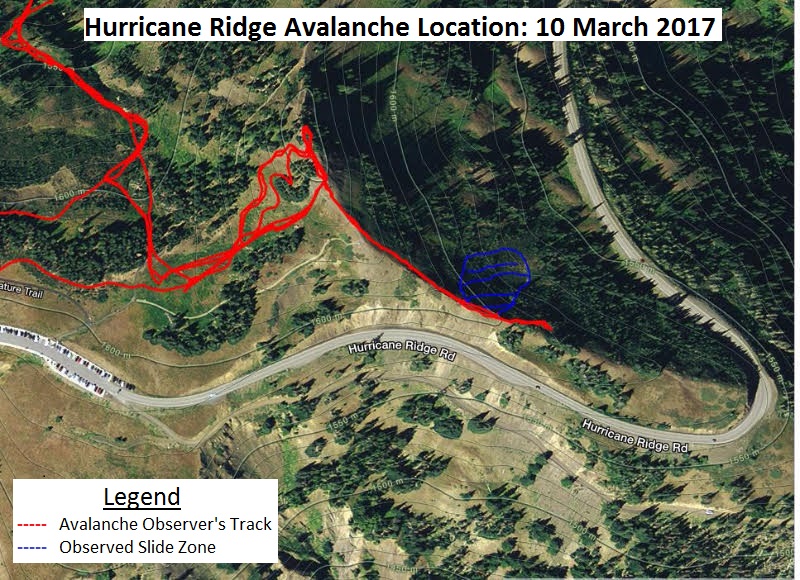 The first snowboarder stopped on the ridge overlooking a northeast-facing bowl near the hairpin when the "cornice cracked and dropped out from underneath him," reported a witness to the slide. The part of the cornice that cracked off was about 6-7 feet deep (overhanging) and about 15 feet in length. The cornice gave way, exposing steeply-sloping rock and dirt on the edge of the ridgeline. The unsuspecting rider jumped up and landed, hip-first, on this freshly exposed ground. He slid/dropped 15 feet, along with the cornice, before hitting the snowpack on the slope below. The weight of the cornice proved to be the necessary trigger for a slab avalanche that swept down the northeast slope for about 150-200 feet, descending 100 feet of vertical and spreading a fan 60 feet wide. The victim stayed on top of the avalanche and slid down about half the length of the slide before coming to a stop. Although visibly shaken, he sustained only minor injuries from landing on his hip when the cornice failed.

The photo below shows the crown face of the cornice, shortly after it fell, and provides evidence of continued propagation of the cornice fracture. 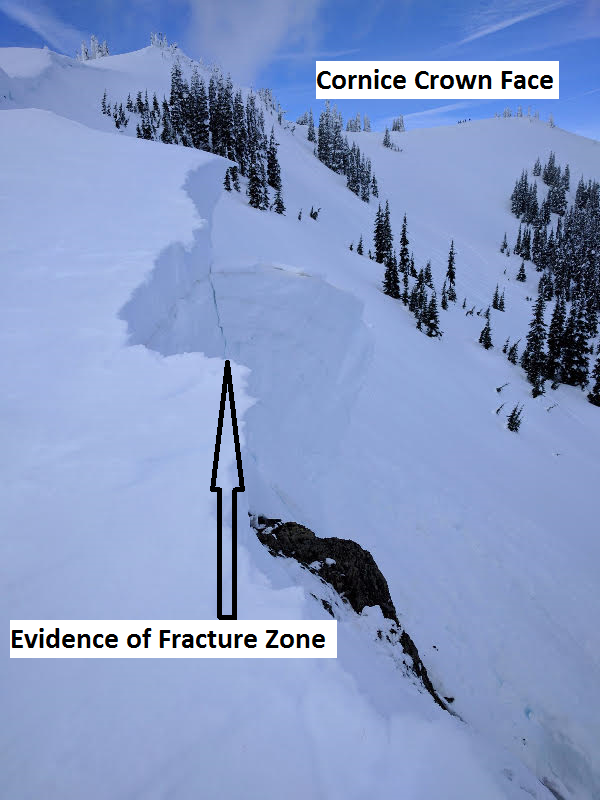 The next image shows tracks headed out beyond the crown, with a bit of debris. Hurricane Ridge Road is visible below. 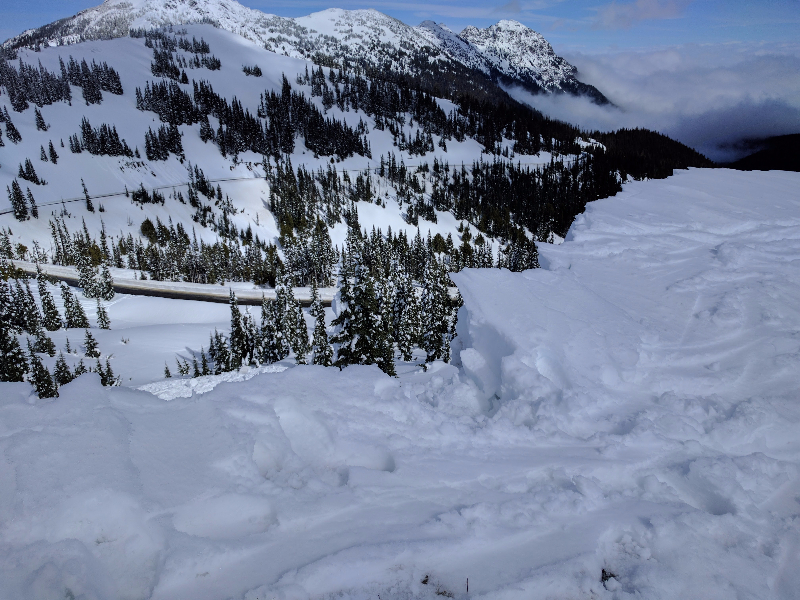 Finally, a video illustrates the view from the location of the cornice failure after the incident.

The moral of the story? We all need to give cornices a healthy dose of respect. Try to assess their size and extent from a safe location before venturing onto ridgelines. And remember to double-check your assumptions. Ridges that were not significantly corniced early in the season may have changed drastically over the course of the winter.

NWAC extends our appreciation to Will Thomas who shared the excellent photos, maps, and observations featured in this blog post.