Operations Update: So with currently benign weather and not a lot of snow on the ground in most areas the NWAC is using the extra time to work on weather stations and other issues while addressing the weather and snow conditions with these blog posts. We are especially focusing on communication issues at Hurricane Ridge and Timberline. Daily mountain weather and avalanche forecasting normally begins when there is sufficient snow for avalanche threat at moderate and lower elevations in most of the Olympics and Washington Cascades.

The storm cycle of mid-month generally caused heavy snow, with a change to heavy rain in most areas on November 17th, except the Northeast Cascades which maintained snowfall. The net gains were in north where Mt Baker and the Northeast Cascades gained 2 feet of snow with total snowdepths topping out at 4 feet at Baker and Washington Pass and 5 feet at Harts Pass Tuesday, before warming and/or rain and some avalanches settled things out. Lighter amounts of snow or up to a few inches of snow were seen at the tail end of the storm.

Second hand reports I got from friends at Washington Pass on Sunday reported a mix of conditions with a surface crust near the pass, a band of good, right side up snow above the pass, but also some horrible breakable crusts at higher elevations.

A low pressure system moved north to south over the Northwest coastal waters Monday and Tuesday. This caused mostly light amounts of new snow but with 5 inches at Mt Baker and 8 inches at Paradise.

We have a couple observations from NWAC observers Lee Lazzara and Dallas Glass from Tuesday near the Mt Baker Ski Area. Lee found very small pockets of wind slab above tree line on east slopes from Monday and Tuesday and very small new pockets of wind slab on west slopes. He saw a lot of riders on Table Mountain with little avalanche activity noted. At lower calmer elevations near and below treeline Dallas found several inches of very low density snow poorly bonded to the MF crust from a week ago on all aspects and possible loose dry avalanche conditions. 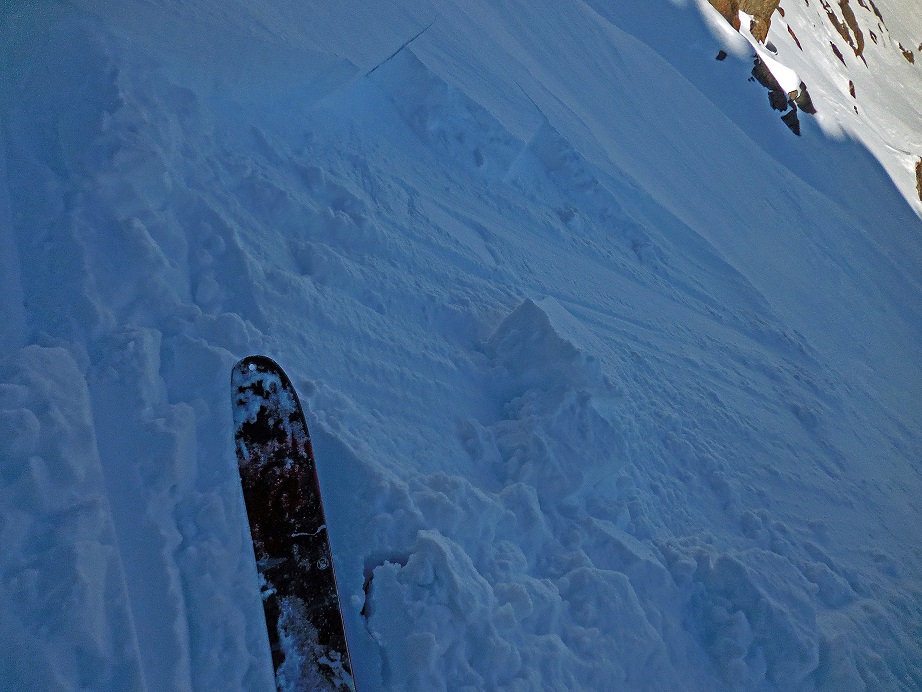 Small triggered wind slab on a steep east slope at about 6000 feet on Tuesday near Mt Baker. Photo by NWAC obersver Lee Lazzara.

A report for White Pass on Turns All Year also from Tuesday indicated shallow new snow on the crust from a week ago with better ski conditions on lower angle slopes.

Thanksgiving Through the Weekend

Sunny weather is expected through the weekend. Currently cool temperatures should warm a bit by Saturday and Sunday. East winds may further build new small wind slab on west slopes at higher elevations. Current observations should stay pretty relevant through the weekend. In the Northwest and Northeast Cascades and on the volcanoes watch for possible small previous wind slab at higher elevations. Beware of possible dry loose snow and terrain traps in lower calmer areas. There is little snow available for avalanches in most other areas.

Surface snow may undergo some faceting through the weekend and will need to be watched when future weather systems arrive. It looks like the weather pattern will gradually become more active next week.